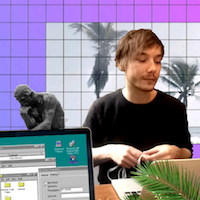 A developer and indie maker.

This is a story of how I designed and built my first commisioned art sculpture placed in a public spot in my hometown of Šentrupert, Slovenia.

The sculpture is a monument, commemorating 30 years of Slovenia’s independence. It holds a memorial plaque in memory of people who contributed and died for this cause.

It’s built from 250 kgs (~551lbs) of glass fiber reinforced concrete, polished and sealed with a protective coat. On the top there’s a black memorial plate made by a local stonemason.

ℹ️ Slovenia gained independence from Yugoslavia in 1991, followed by the Ten-Day War. Even though I was only a toddler then, I feel a strong emotional bond to this time and this event.

The requirement was rather simple: make something nice that will hold the memorial plaque.

I wanted to showcase the aesthetic versatility of concrete while keeping the viewer ergonomics and accesibility in mind.

What I settled on the is the following sketch, which served as the official design plan. 🤷‍♂️

For the mould, melamine boards were used. They’re more or less standard for concrete formworks like this one. Since their surface is smooth, the concrete is smooth as well, which reduces the amount of sanding needed for a nice finish.

The mould needs to be strong enough to withstand the force of fresh concrete.

The forces pushing the mold apart while the concrete is in liquid state are not to be taken lightly.

In fact, what you see is my second attempt. The first mould failed miserably and it fell apart while pouring (here’s a Twitter thread with more details if you want to know how that went).

I optimized the cement mix for extra strength.

This means high cement to sand ratio, adding glass fibers, and using additives, such as superplasticizer and pozzolan (silica fume).

Ingredients in the mix:

Once the concrete has been poured and smoothened on the top, I left it to cure for 2 days.

After a couple of days of curing, the sculpture was ready to be unmoulded.

Removing the formwork revealed a beatiful concrete cast with straight edges, with minimal amount of air pockets, and no cracks.

I breathed a sigh of relief.

Initially, I wanted to polish the sculpture with a diamond pad grinder to create a perfect, shiny surface. To see how that looks like, you can check how I made my concrete coffee table.

Later, I changed my mind and decided to go with a more raw, brutalist style.

I sanded the surface using an orbital sander with varying grits (90, 180, 240). Then, I improved the edges using cement grout mixed with a special bonding agent, and added two coats of cement sealer. This prevents the concrete sculpture from soaking up water, protects the surface, and gives it a beautiful shine.

The monument needed to be transported from my house to a town nearby.

An arm lift truck, a couple of heavy duty straps and two construction pros did the trick!

On the day before the official Statehod Day, we unveiled the monument together with the mayor of Šentrupert. There was a nice little ceremony.

It was a special day for me. I’m happy I could contribute a piece of art to honor my country and hometown.

Subscribe here to keep up with posts that I publish: